All hands on deck... 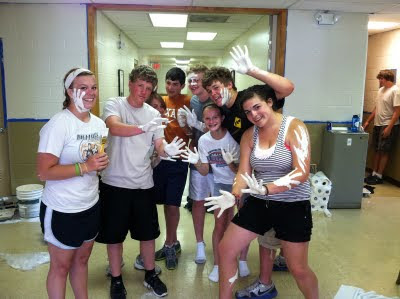 The past few days have been a whirlwind of activity at the Samaritan House Administrative Center. Local volunteers, as well as trekkers from across the state, donated their blood, sweat and tears (mostly the sweat) in a monumental effort to help Samaritan House refurbish and retool the campus.

Pictured, is a group from St. Bernard's Catholic Church from Billings. Paint was flung, weeds got plucked, overgrown hedges met their fate, and stoves were scoured by selfless individuals who wanted nothing more that to lend a helping hand. The attitudes were matched only by the weather, which was absolutely ideal.

There are changes on the horizon at Samaritan House beginning next week as we endeavor to serve dinner at the administrative center. More on this later...
Posted by Homeless In the Flathead at 8:54 AM No comments: 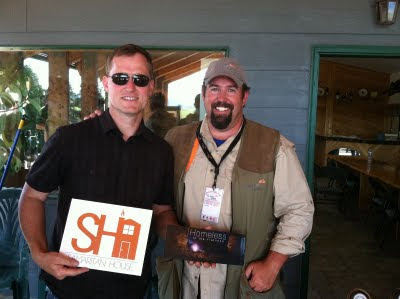 I participated in a great event over the weekend - Clays for Kids - a clay shooting event aimed at raising money to help organizations that assist hungry and homeless children.
Pictured above is Clint Walker (on right) and myself representing Samaritan House and Homeless in the Flathead.
The local CBS affiliate KAJ-TV did a very nice video covering the event - click here to view.
Posted by Homeless In the Flathead at 8:30 AM No comments:

The Vampire and the Hoarder.

Blood loss is not typically a good thing. We often go out of our way to prevent any sort of activity that might induce a spilt drop or two. Securing mass quantities of a particular item also smacks of behavior that is frowned upon by society. On July 20th, Samaritan House was a willing participant in both a massive blood-letting and the stock-piling of commodities.

And it was great.

The Red Cross held a blood drive at the Samaritan House's campus at the old armory. Thirty-five people donated their time, energy, and platelets. At the same time, a food drive was unfolding beneath the same roof. It was a beautifully orchestrated dance of charity and selflessness that will benefit countless faces who did not have the opportunity to set foot on the premises. Volunteers from across the community inundated both Samaritan House campuses doing everything from painting to organizing food.

Some of Kalispell's needs were met on two very distinct levels. First, the medical ramifications of the blood drive cannot be underscored. The Red Cross provides an invaluable service to the community and it was an honor to partner with them on this endeavor.

Lastly, Samaritan House was able to expand our pantry which will allow more people to eat and have some basic needs addressed. The volunteers did an amazing job and shouldered a great deal of the burden on this project. Thanks to all who donated and made this a successful event.

Thanks to all the vampires and the hoarders!
Posted by Homeless In the Flathead at 12:56 PM No comments: