It is that time of the year again to help Samaritan House meet the challenge of homelessness in Northwest Montana and have fun doing it. The 5th Annual "Cowboy Up" benefit dinner concert and auction will be held on April 21st at the Best Western White Oak, on Highway 93 South, in Somers.
Tickets for the benefit at $30 each will include a pig roast dinner, live and silent auction, ticket holder raffle and live music from the Smart Alex.  Beer and Wine will be available for purchase. Doors open at 5:00 pm and dinner begins at 6:00 pm. Tickets can be purchased at the door or at Samaritan House.
Samaritan House is one of Montana's premiere homeless shelters. It provides a Transitional Housing program with Case Management services, a kitchen and cafeteria and a broad range of services and supports to help break the cycle of homelessness. In 2011, Samaritan House served over 1,100 local homeless people and provided more than 34,000 meals in the cafeteria.

Smart Alex is a four-piece band with over 139 years of combined musical performance experience. They play a wide variety of music including classic rock, swing and country.
Posted by Homeless In the Flathead at 9:27 AM No comments: 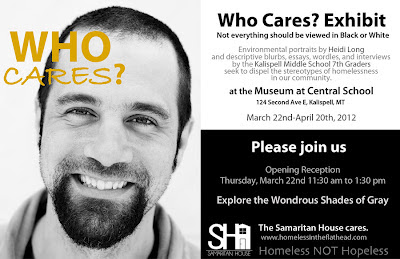 Posted by Homeless In the Flathead at 11:55 AM No comments:

Can Poverty Be Eliminated?

Poverty is a polarizing issue because when we are not around it we can pretend it doesn't exist, but when we are confronted with its reality, it seems inescapable. There are numerous thoughts on how (and if) it can be eliminated and everyone from William Graham Sumner to Mother Theresa has chimed in, offering different ways to deal with this issue. As I drove into work this morning I thought maybe I could toss a few more ideas into the forum.

First, poverty is a social problem and the source of other social problems. If we want real change, then we need to recognize that poverty is one of the results of a broken system that traps people and ensnares them in a vicious cycle.

Poverty is caused by a lack of resources and not a deviant value system. One unfortunate stigma attached to the poor is that they will do anything to alleviate the burden of their situation, even if that means breaking the law or committing crimes against others. The real issue here is the absence of resources that put people into a hole from the beginning and they feel there is no way to catch up or break even; forget about getting ahead.

Those living in poverty cannot do this alone. It would be great if the poor could wake up, eat breakfast, and then shake off the shackles of poverty on their own, but this is not reality. The kindness, compassion, and fortitude of others is essential in helping eliminate poverty.

Poverty cannot be eliminated by the private sector. Conventional wisdom says that private business will generate more jobs which will lead to a greater opportunity for those living in poverty. On the surface this looks great (and does help the economy) but there is one slight problem: with an overabundance of overqualified applicants (I know people with college degrees working in the fast-food industry) the jobs that were previously available for the poor are now being taken by other who normally would not fill these jobs.

Poverty is a national problem and, therefore, requires a national solution. There are two states that receive no state-funding for homelessness: North Dakota and Montana. Poverty must be addressed at the federal level to ensure the poor throughout the nation will receive equal benefits and services. Poverty needs to be attacked nationally to deal with the structural problems that cause poverty.

(Much Thanks to Stanley Eitzen, Maxine Zinn, and Kelly Smith)
Posted by Homeless In the Flathead at 8:10 AM 1 comment:

Black and White in a Gray World

What we see is seldom an exhaustive representation of what is actually happening.

We, as people, have done a lot of amazing things. Think about it for a second, and you will be flabbergasted by the sheer volume of incredible feats accomplished by the human race: minute rice, bullets, wristwatches, advanced thermonuclear physics, the NCAA college basketball tournament, Folsom Prison Blues... the list is endless and some days I am generally pleased that I am a human (other days I soooo wish I was a dolphin) because of all the wonderful things we have created. I will admit there has been the occasional item invented that I am not happy with, but I'll save those for a different post because the weather is beautiful and the last thing I want to do is rain on all the individual parades walking up and down the streets of Kalispell.

Another facet of humanity that separates us from other beings (in this instance, lets say sheep) is an elevated sense of awareness and the capacity to look at a situation and gauge what is happening. Quite simply, if I am in line at Target and there is a mother with a screaming child strapped to her hip wailing away for all of the 59901 to hear, I can evaluate the situation and make some educated guesses as to why junior is unhappy. Maybe he was denied some candy. Perhaps he doesn't feel well. It could be he just saw the price of gas.  Or, his grandmother passed away and he misses her terribly. Anyway, I look at the situation and process what is unfolding before me, whereas a sheep might just bleat and move on. I will never know the full extent of the circumstances leading up to that very moment in time when I experience the child's tantrum; all I know is that I want the kid to shut up.

Things are never as uncomplicated as they appear. When you see a person you believe to be homeless, do you ever ask what led to his or her circumstances, or do you make a snap judgement based on an incomplete photo of what you see?

Homelessness is not an alternative lifestyle and it goes deeper than the mere circumstances you see on the surface.


Khalid has medical bills and no insurance. He has exhausted all his savings and can’t keep up on his rent so he finds himself crashing on various couches belonging to friends and families. Even the patience of the kindest person eventually wears thin.

Edward started using meth when he was 16. He spent time in and out of jail and cannot keep a regular job because of his drug habit, which has robbed him of his health, finances, and dignity. He spends each night curled up in a different park.

Thomas and Rosemary were victims of the housing crisis and their entire world has come crashing down around them. In the span of three weeks they have gone from a nice house in a residential area to living in a one-room transitional housing unit in the shelter. They pray they will be able to find something permanent soon.

Anna is in the third grade but hasn’t finished an assignment in nearly a week. She and her mother have been on the run from her abusive father. They have no family in the area and feel absolutely alone when they check into the shelter.

Janine moved to a new town for a job that never materialized. She has been sleeping in her car for over a week and finally realizes that she needs a permanent place but cannot afford a deposit along with the first and last month’s rent. She feels hopeless because the shelter is at full capacity and has no room for her.

Sometimes gray is the color of life.

Posted by Homeless In the Flathead at 8:30 AM No comments:

On Saturday, March 3rd, Samaritan House is having a Garage Sale at our Administrative Center. Please stop by peruse the assorted items and see what  kind of great deals you might find. Tell a friend, co-worker, random stranger, or anyone else your heart desires. The location is the former Armory across from Pederson Elementary School on 2nd Street West in Kalispell. We will be open and ready to go at 8am and stay there until 1pm or we run out of items- whichever happens first.

Also... (I'm not done yet!) we are hosting a Blood Drive on Tuesday, March 6 from 10:30 am to 3pm. We still have spaces open if you would like to make an appointment. Call the main office at 257-5801 and ask for Cary. If you are unable to reach her, simply leave a message and we will see to it that you are able to sign up. This will also be held at the Administrative Center.

Thanks and enjoy your weekend!
Posted by Homeless In the Flathead at 9:56 AM No comments:

I Want To Be Sick

Sometimes I hate trying to use words to express my feelings because they never capture the full scope of what I'm attempting to describe. Think about if for a minute. When you tell someone you love them, you are conveying many multi layered and complex emotions and inferences. However, when you enslave that word to a pad and some ink, it comes out: L-O-V-E. For me, arbitrary letters just don't cut it.  Other times its fun to look at the composition of words (be patient, I swear I'm going somewhere with this) and how they can be combined to create a new word with a different meaning. 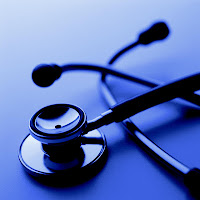 For example, many of our residents are uneasy. They live in a near-constant state of dis-ease. Life's circumstances have brought them to Samaritan House for numerous reasons and many of them dwell in various states of antagonism, hope, despair, longing, and happiness. Emotions are fluid and, like everyone, our residents are forced to deal and interact with their situation. A significant difference, however, is that many of the homeless are operating from a base level of dis-ease... or dis/ease... or disease.

Consider, for a moment, this word and how you feel when you are physically ill. Sickness causes feelings of uncomfortableness; when your body is literally not at ease it is diseased. By this rationale, can I write that homelessness is a disease? Here is where my earlier conundrum enters the picture because I can type whatever words I want but the gravity of the situation will never hit you like the reality. You can read these words: 1 out of every 5 children live in poverty. It makes you uncomfortable but the dis/ease you feel is incomparable to the actual disease of going to bed and waking up hungry.

I was watching the news last night and I felt an indescribable disconnect from what I saw. Tornadoes in the Midwest, a school shooting in Ohio, more conflict in combustible parts of the world. The list goes on for as long as it takes to change the channel. Its apparent this planet is sick and I'm not sure if there is a remedy that is going to evaporate out of thin air anytime soon. So until that happens (who knows, maybe the Mayans will be right?) what can we do to break free form the 'gawking-theorizing-making excuses while empathizing-back to ignoring the problem' cycle that has lulled us into a comfortable numbness?

Sometimes I wonder if we have self-medicated our emotions into an antidote that is immune to the disease around us. Maybe a little sickness, in this instance, is good for the soul?


Posted by Homeless In the Flathead at 8:08 AM No comments: